By Jonathan Young on 9/20/16 in Advocate Story, Staff Story Diiv Sternman joined Chapel Hill team as Member Services Coordinator in May of 2016. And we are so happy to have them!

I was at a point in my career where I had done direct service for 12 years—and it does take its toll.  I was reaching a point where I thought I needed to find a way of still doing this work while putting to use all of the things I’ve learned—all of the wisdom that clients and co-workers have shared with me over the years—and find how to put that to good use in the community.

So, I noticed CEF—it was on the list—but there weren’t jobs open. I was watching you all and referred a couple of people from the shelter that I was working at.  When I read the job description, I thought, “This is not only an organization that I really believe in, but it’s a way of doing the work that fits what I need.” I feel like I have a lot I can share with student volunteer and a lot of experience with the populations that we’re serving. I now also have a chance to get back to big picture—having a vision and being able to impact structural changes. END_OF_DOCUMENT_TOKEN_TO_BE_REPLACED

“Remember that these are the people that nobody else wants to work with, it seems.  So, let’s not leave them out. We can’t leave anyone out.” — Mark Scruggs, Open Table Ministry, Voucher-Holder for 5 years We welcomed 48 landlords and property managers, 23 partnering organizations, and over 80 supportive community members into the downtown Temple Building for the Mayor’s Landlord Roundtable.

Holding a Voucher, Without a Home

Last week, the Durham Housing Authority (DHA) opened the waitlist for Housing Choice Vouchers for one week only. Durham residents crowded CEF’s office to apply in hopes of getting a voucher of their own—a federal subsidy that should expand their access to market-rate housing. But for many voucher-holders, that access is being increasingly denied by the landlords that say “no” to this form of payment.

One CEF Member shared what a blessing the voucher has been for her and her three kids. “I was homeless and disabled, but DHA made a way for me to have a place for me and my kids. If not for this voucher, I’d still be in a shelter.” But many others are sharing stories like Tasha’s, who shared, “I just wish more landlords here in Durham would accept vouchers… being homeless for two years has just been a nightmare for me and my family.” The feeling can be crushing, to be without a home while holding a housing voucher that seemingly no one will accept.

You might ask as we did: why would a landlord refuse to accept a voucher—a guaranteed monthly rent payment? Why is demand for safe and affordable housing so high, but supply so low? With DHA opening up new partnerships with housing and homeless non-profits this year, and with immense support for affordable housing in the community, we knew we could cultivate conversations to answer these questions.

On the afternoon of June 30th, a dedicated team of CEF staff, interns, and partners welcomed 48 landlords and property managers, 23 partnering organizations, and over 80 supportive community members into the downtown Temple Building for the Mayor’s Landlord Roundtable.

At the event, Mayor Bell challenged the community to work together to lease up 115 vouchers by the end of the year, and City councilmember Steve Schewel highlighted the importance of the DHA as a crucial provider of affordable housing. Next, Anthony Scott (the new CEO at the Durham Housing Authority) shared his vision to increase the efficacy and efficiency of the DHA. Finally, Terry Allebaugh (NC Coalition to End Homelessness) facilitated a conversation with local landlords and property managers on the benefits and difficulties they had experienced with the program.

Snehan Sharma, one of the organizers of the event, shared, “I think the Mayor’s Landlord Roundtable was a perfect example of how good grass roots community organizing can change discourse. Durham is facing a tricky problem with Housing Choice Vouchers, and it turns out that it is affecting lots of folks. Everyone who lives in Durham is a stakeholder.” 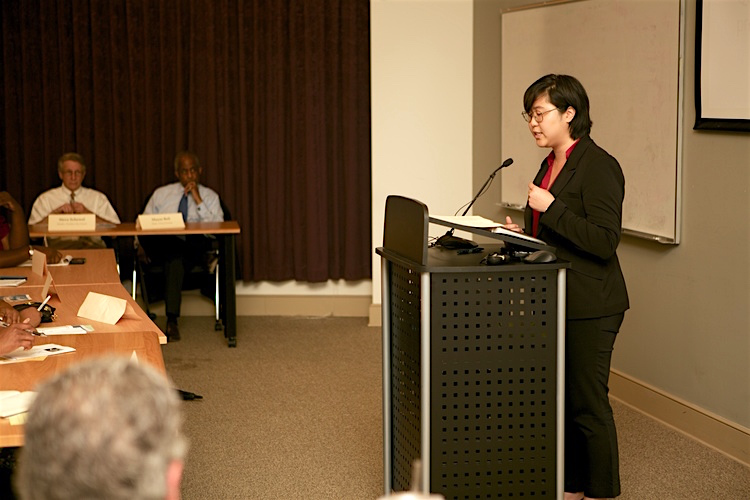 CEF’s Janet Xiao, one of the Roundtable organizers, invited landlords to join the Unlocking Doors Initiative partnership, and to stay tuned for next steps.

These conversations equipped us with the information needed in order to take action. The Roundtable kicked off the Unlocking Doors Initiative, a new collaborative partnership between the DHA, City of Durham, non-profits, and landlords. Over the upcoming months, the group will:

If you or friends or family are a Durham voucher-holder or involved in the housing sector, we’d love to hear from you! Email us at info@unlockingdoorsdurham.org Richard is a devoted father with a calm, steady spirit. Talking about his son, you can hear the pride welling up with every sentence. He describes his son’s leadership in the school band, musical talents, amazing adaptability to all kinds of situations, and just how much of a people person he is – as well as their mutual love of the outdoors.

Richard began staying home with his son after a back surgery five years ago, saying “With my back problems and the surgery I had 5 years ago, that turned out to be the best job for me. My now ex-wife, she brought home the money, she had a good career in IT, so it allowed me to be with my son, which was wonderful, except that I needed an income as well being on my own now.” At the time of his surgery, Richard and his family were living in Colorado. When they returned to NC and after he and his wife divorced, Richard started working towards being able to re-enter the workforce after several years focused on time at home with his son.

He heard about CEF from a friend, and first attended one of our community cookouts. From there, Richard joined our weekly Saturday morning Opportunity Class led by Mike Wood. “For a lot of the folks in the class, it was great getting together once a week and being in touch with each other. You know how each other is sort of doing, and talk about jobs, talk about what kind of success everyone has had with interviews, all kinds of housing opportunities.”

Since graduating from the class, Richard shares, “My whole world has changed now. I spend 60 hours a week and sometimes 70 hours a week working, with one day off and 12-hour days. I just remember [Opportunity Class] kind of getting me up out of the rut.”

Richard landed a job in his field, as a Service Representative for a car dealership! To get ready, Richard worked with Mike and several volunteers. His Advocate, Claire, helped him to update his resume and polish it for specific opportunities. He started meeting regularly with Dick, a volunteer who helps CEF members prepare for job interviews. “Dick counseled with me for about an hour at a time working on my resume and interviewing, and either he mentioned or I mentioned, saying I’d like to have an opportunity to maybe do some volunteer work.” Dick connected Richard with CEF’s volunteer coordinator, who set Richard up to start volunteering at our front desk.

Funny enough, Richard says that it was the experience of volunteering at our front desk that made him feel ready to go back to work. It was a big adjustment at first with a lot to learn. “Going from being that at-home dad to volunteering at CEF was the bigger step because I didn’t have any background in that, I felt good about being able to do it. Once I had done that for those 3 weeks, it felt like only a small step up to go start my job.” Comparing his time at CEF to his full-time job, he shares, “I was answering the phone, talking with people that needed our help, scheduling them in the system, and then having them then come in and meeting with the advocate. It’s not so different from what I’m doing now… It was easy to transition from CEF working the front desk to service advisor.”

Looking back on his whole experience and when he describes CEF to others, the best part to him is that “It’s a community that people can feel a sense of security with at CEF. People they can trust, people they recognize.” We have been lucky to have Richard as a part of the CEF community, as a member in Opportunity Classes, as a volunteer, and now as an Alumni Member. Congratulations, Richard!

On Sept 15th, at the Justice United Public Assembly at St. Thomas Moore, Yvette Mathews led a choir of 22 Members and Advocates in song, singing soulfully for the cause of affordable housing in Orange County and in support of the 5 million dollar bond that is being voted on in Nov. We hope this is the first of many performances at public meetings and before faith congregations to come in the future!  housingorange.org #makeroomorange The “Understand Your Credit History” FC Session — Most 1-on-1 sessions start with goal-setting/familiarization input boxes.

I’ve heard it said that the exchange of knowledge is among the most intimate of human interactions. In my time at CEF, I’ve seen this exchange happen over and over again. Members share wisdom and experience with Advocates. Advocates share CEF’s resources and body of knowledge with Members as they walk together to achieve Members’ goals. This relationship-based model of learning and sharing is at the core of CEF’s mission and identity.

It was clear, when we recognized the need for a more intentional delivery of existing resources and knowledge through a Financial Coaching program, that we should start with a 1-on-1 approach.

We rolled out the first phase of our 1-on-1 program in January: sessions designed to be interactive and to optimize Member choice. Each session takes about an hour and involves learning financial capability skills and putting them into practice in order to write resumes and cover letters, pull credit reports and dispute errors, and build budgets and savings plans.There is a menu of 18 sessions in the first phase, which creates a great deal of flexibility and choice for Members. Additionally, we’ll be rolling out the second phase of Financial Coaching (FC) sessions this fall/winter, which will add a robust 25-30 sessions to the menu. 8 of the first phase of 18 Financial Coaching sessions!

We look forward to continuing to build and improve this program, and are excited to watch it grow in CEF’s soil. We will continue to listen to Members and Advocates to brainstorm new additions and fixes to old sessions. As always, this is a community effort. We look forward to the relationships that will be built as knowledge is exchanged through the 1-on-1 Financial Coaching program!

Members are encouraged to complete 8 FC session at a time. They can add as many or as few as are relevant to their goals. However, Members who would like to qualify for a Safe Savings Account 10% match must complete 8, 1-on-1 sessions or Community Coaching (aka.  Opportunity Class), in addition to meeting their Savings Goal.